EatAhFood | A lil pasta something...

A lil pasta something…

I couldn’t find my favorite all-purpose elbow pasta (in the red pack) this week in the grocery, so I tried something new. 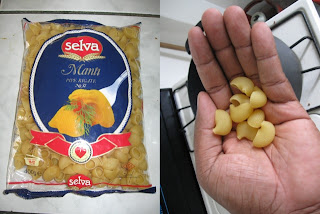 It’s called pipe rigate, and it’s more or less fat elbow pasta with one end pinched closed. A pasta like that is great for retaining sauces, but I had something else in mind.

I wanted to do something relatively fast but fancy-looking. I cut up some tomatoes, pimientoes, green peppers, onions and garlic. I grated some carrots and opened a tin of black olives. 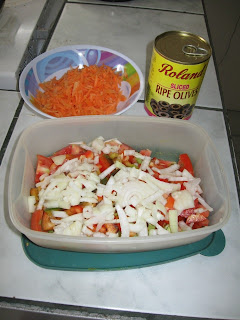 Here’s a tip…if you’re cutting up veggies to sautee, and putting them all into a container like the one pictured above, leave the garlic and onion for last. Why? When you throw everything into the pot, you want the garlic and onion making the most contact with the hot oil, releasing their juices (and scent) first and foremost. Tomatoes don’t have to cook as much, so you should cut them up first and put them at the bottom of the container. 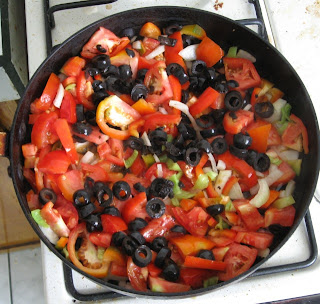 I dumped them all into a high-heat frying pan with just a bit of olive oil. Colorful…smelled good too. I only let the veggies sautee up for a few minutes…no more than five. DON’T cook the carrots! See how I had them separate?

And then I forgot to keep taking pictures.

But you didn’t miss much. I mixed up a cheese sauce, as detailed in the last post. Then I mixed the sauce and the veggies together.

I had some white fish fillets seasoned up there waiting for next week, but say what…plenty fish in de sea.

I beat an egg and put it in a container. I dipped the fish slices in the egg, covering them without removing the seasoning. I forgot to take pictures of this.

But I remembered to shoot the rest of the battering process, which involved laying the egg-covered fillets in seasoned bread crumbs. 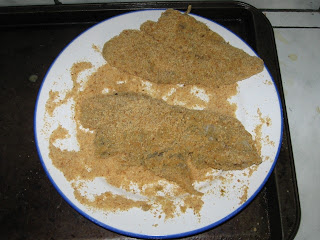 And placing the fillets into the frying pan. 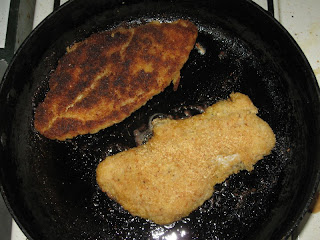 Here’s the finished product, which I just finished eating before writing this post. 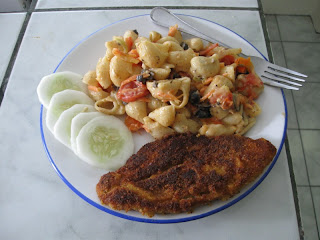