one week ended on a low note, which wasn’t so bad. but then certain situations ran over into the following week, promising another low ending. luckily, the always-lime-encouraging-and-ready-to-bubble-a-pot baidawi suggested a little pizzat to lift the spirits. pizzat=pizza by the way… long story. so we caught the grocery right before it closed to get some ingredients to make the goodies. 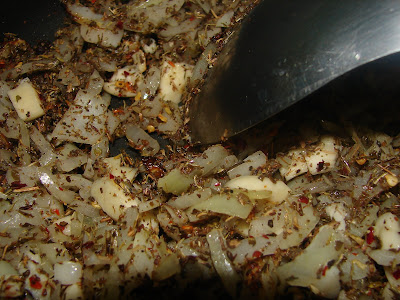 in a pot we put a little oil, onions, garlic and pizza seasoning. 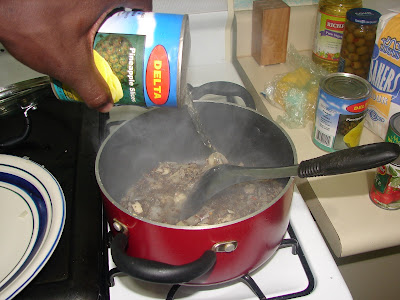 after it sautéed a little, in went some pineapple juice. 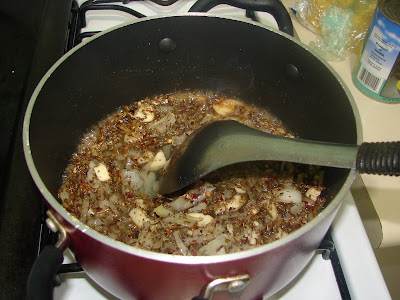 that bubbled for a while. meanwhile, the pineapples themselves went on pause for later on. 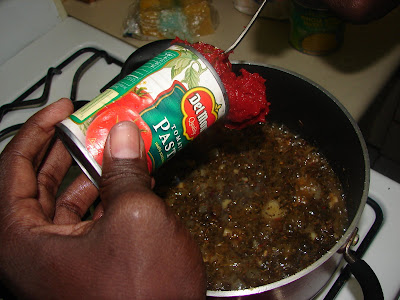 back to the sauce. tomato paste joins the mix. 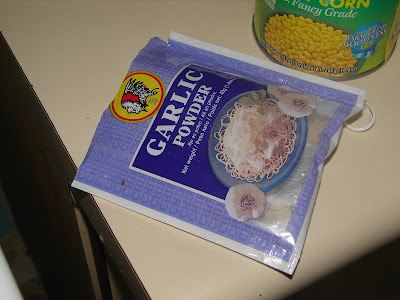 here’s another ingredient that you’re going to see a lot of through the process… garlic powder. 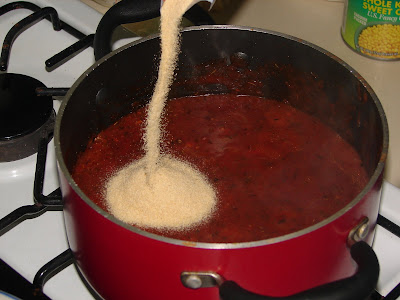 after adding some ketchup and a little water, in went the garlic powder. that’s about it for sauce. 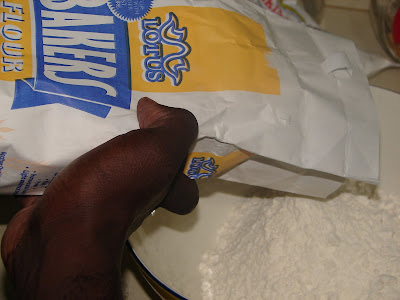 time for the dough. flour obviously. 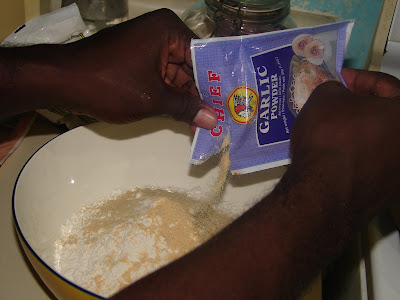 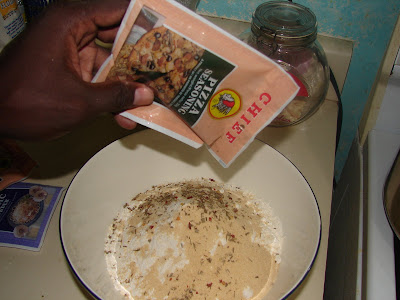 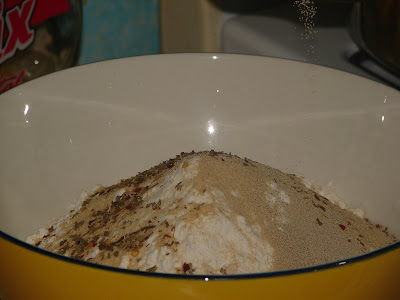 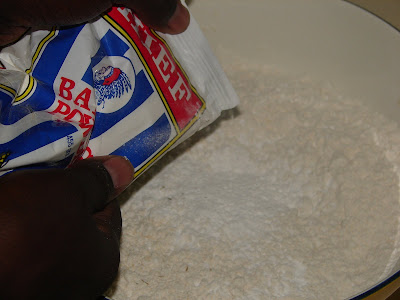 baking powder is a must. after this is the kneading process which really is interesting only once, so i didn’t document it in this entry. 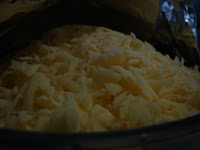 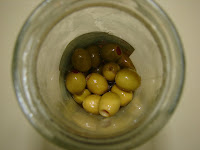 now toppings are usually simple. just get something and throw it on there. in this instance, we grated some cheese, opened a can of corn, cut up the pineapple from before and the curious mouth applied her pastelle preparation experience to the cutting of some olives. 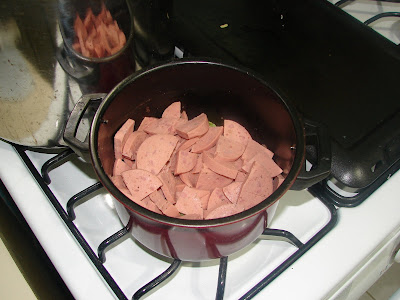 the chicken salami begged for some ceremony though. that went into a small pot with a little oil, onion and some pimento peppers. 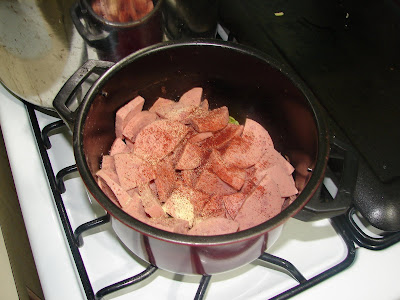 garlic powder (no surprise there), paprika and the good ole all purpose seasoning. 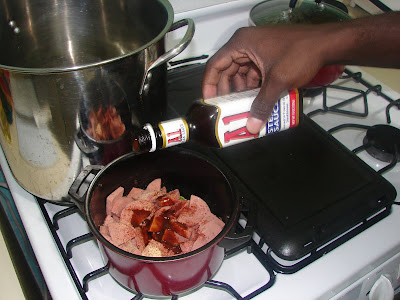 did you expect A1 sauce here? did you? 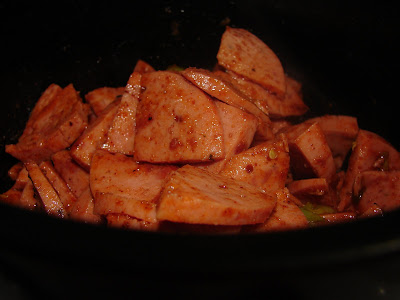 cooked that up a little and let it make a little sauce of its own. 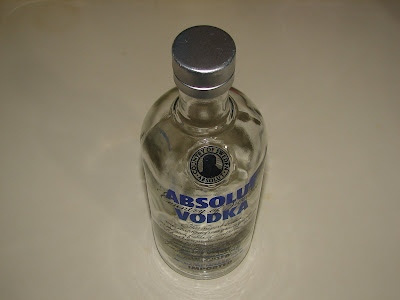 by this time, the dough had time to set, so dawi used this unique, designer, special edition rolling pin to press the dough into a suitable format. 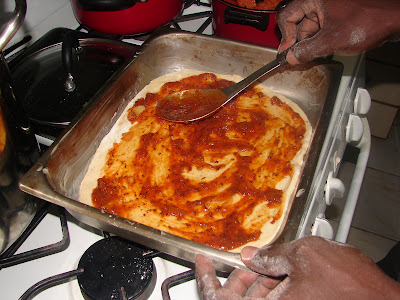 the baking utensils were greased with a little butter, before he put the dough in and spread the sauce on it. 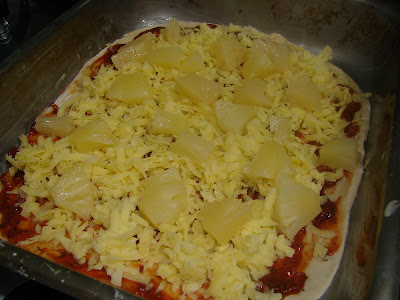 next, the grated cheese followed closely by the pineapple. 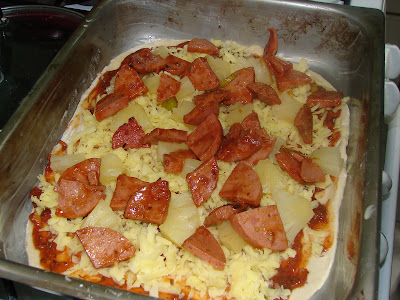 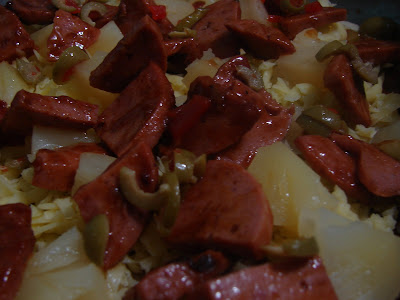 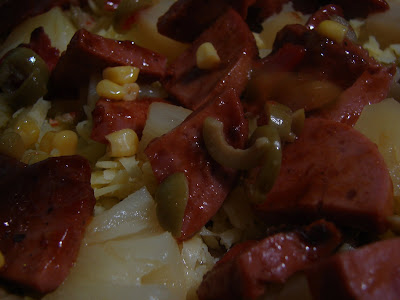 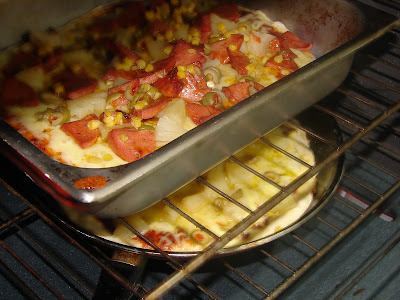 oven. preheated it at about 300. now notice the frying pan on the lower shelf. any port in a storm. storm meaning lack of a baking sheet. port meaning a shallow frying pan with an unbelievably resilient plastic handle. 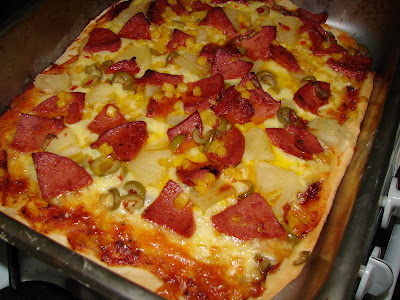 this was round one which included this pizzat with chicken salami, pine, olives and corn… 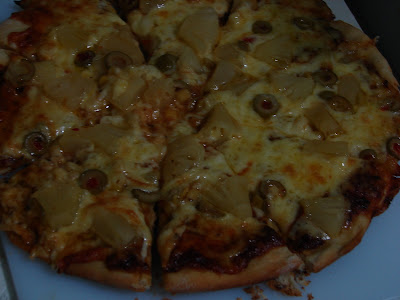 as well as this round frying pan pizza with pine and olives. 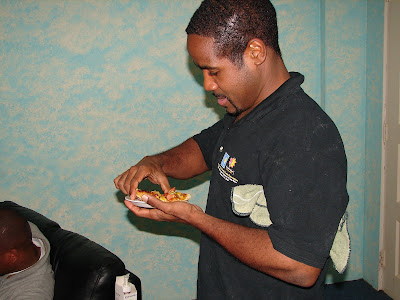 it was enough to hold professionals like warren and renaldo at bay, while taking the mind off of the pressure of the week.