So yuh enjoying the first few months of fatherhood, lovin up de youth and being the playful yin to Mummy’s nurturing, protective yang. So far yuh a lot more supportive than proactive, because the child more breast-focused than a KFC ad, and even if yuh have boobs, they not producing milk. Then one night yuh liming with baby while getting ready to enjoy a late night snack, and yuh notice her looking real hard at yuh plate. For anyone else, yuh first instinct would be tuh bawl, “Gone from here nah!” But this is the love of yuh life, and yuh start tuh put two and two together. Around six months…looking with deep interest at food?

Time for solids! Or time for semi-solids, since you’ll be turning everything to mulch before serving. Either way, it’s time for you to step up and apply yuh hand to some of the most important meals you will ever prepare.

Cooking for the baby can prove more challenging than it sounds on the surface. While it’s true that, for the most part, you’ll be making one-ingredient meals, the issue for sometime-ish chefs like me is that the baby cyar deal with a Subway or a corn soup on the nights you doh feel to cook. This stage is crucial to developing the baby’s digestive system and sense of taste. Yuh always need to have two meals a day waiting there to quickly warm up and serve out. Breast milk alone doh cut it after 6 months, and bottled baby food, while convenient, is processed and costly.

So it’s a question of logistics. And nothing doh deal with logistics better than containers, a freezer, and a mini blender. 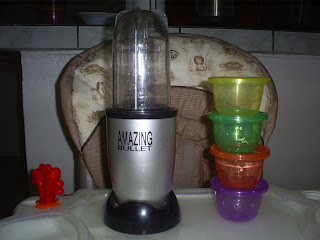 These will be your best friends. I couldn’t figure out a good way to get the freezer in the shot. 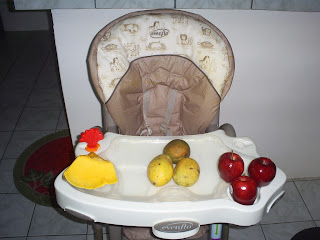 Pumpkin and apples are a great place to start both nutritionally and for ease of preparation. Other great, easily available choices are carrots, paw-paw, squash, zaboca, bananas and pears. Then there’s bhagi, broccoli, cauliflower and various peas.
Mango, especially julie mango, is the king (queen?) in this house, but as the season fades away, they’re getting tougher to find. Of these choices, mango, zaboca and paw paw require the least preparation. Just remove flesh from skin, and move on to step two. All the other foods require a fairly universal first step.
Two quick notes: The foods you pick are up to you and the baby, but make sure that you feed her equal servings of fruit and vegetables per week. Also, variety is important. Don’t stick to one comfortable food for too long, as I did with mango. If the baby braces the zaboca the first time, try again next meal time. And again. And again. Persistence is key.

Steam, boil or bake the foods to soften them up first. I have pumpkin and apple pictured above. Pumpkin getting a typical steam, in a colander over a pot of boiling water. Steam till soft and well-cooked, but not till soggy.
I chose to boil the apples, although they can bake as well. Peel the apple skin, remove the core totally, and boil in a little bit of water. Cook until they’re soft, but not falling apart. Test with a fork. At this stage, an apple is about one baby meal (remember, the core and peel are removed, so it’s less flesh than you think), so cook to suit.
Now for the secret weapon, an implement I would hope you invested in a long time ago. 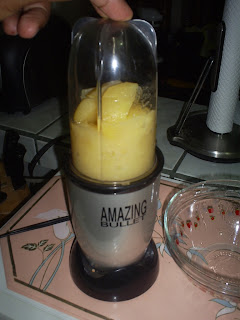 Much easier to use, clean and store than a blender. Much less wastage.
Puree. Yuh want a soft, smooth consistency, but not liquid. Thicker than a thick peanut punch, but soft enough to fall off the spoon. If you need to add water, use the same water you steamed over or boiled in. Remember to remove the pumpkin flesh from the skin.
Invest in some small, BPA-free, stackable plastic containers. I had my eye on this set on Amazon, but a relative sent these colorful ones instead. Each of these is about 5 ounces, which is more or less what a baby should eat (or eventually eat) per meal during their second six months. If you know a place selling these locally, put it in the comments section. My money would be on Excellent, IAM or any of the bigger baby/childcare stores. If you can’t find containers, an ice tray is a great alternative. One block for the first few weeks, then build up to two. 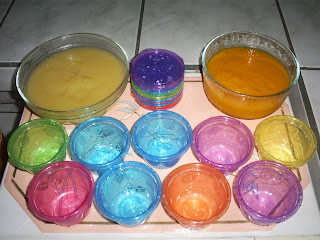 Ready to pour and store. I made a mix of apple and pumpkin in a few of the containers. I like to call it Pumple. Other favorites are Cinnamango, Pumpkrot and Cinnapumpkrot. I could see Mhangi and Mangoccoli being concocted in the near future. Sometimes the best way to get the baby used to a new food is to introduce it mixed in an old favorite.
And if you’re wondering, yes, it’s okay to add a slight spice to the baby food. It helps them get used to taste variety. 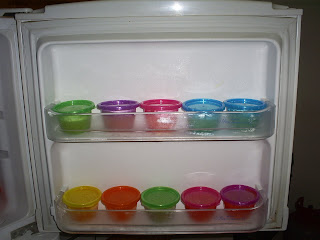 I wouldn’t lie…seeing this is a joy. Neat. Orderly. Convenient.
Baby food can be frozen for up to two weeks. Try to keep them far from the meats. I make about a week’s worth at a time. A few are in the freezer itself, and one should always be in the fridge thawing out and standing by. Easy to make, easy to store, easy to put in the lunchbag to send to daycare, and you can feed baby right out of the container.
I usually heat it up (to slightly above room temperature) by placing the container in a bowl of hot water for 5 minutes, but a quick spin in the microwave works as well. If the thaw is lumpy and runny (pumpkin especially), don’t worry. Just stir it a bit with the baby spoon to get it back to a smooth puree consistency.
So yuh good to go. This is usually a nice Friday or Saturday night lime to have with the baby (is not like yuh goin anywhere else at this stage). Put him in the high chair close to you in the kitchen, and walk through each step of the cooking process with him. Watch de little mind working, and feel satisfied that yuh start de training from early.