EatAhFood - what the hell is a cannelloni?

what the hell is a cannelloni?

apparently lots of people knew about this thing. where was i? under some kinda gourmet rock or somethin’? the word sounded made up. no way that existed. then i saw this: 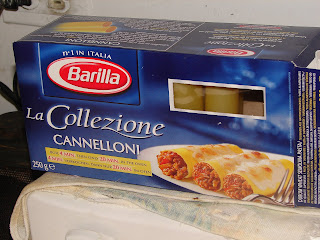 so i guess it is real. obvious next question: so how do you cook it? 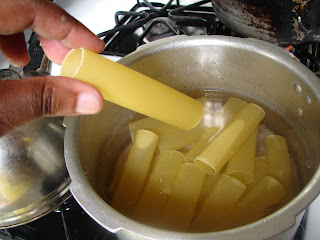 well it’s pasta, so there must be some kinda boiling. unfortunately, the no boil variation either isn’t available or isn’t available any where close to us. bring a pot of water to boil and add a generous bit of salt to it. only put the cannelloni pasta in when the water is bubbling. boil the pasta for 4 minutes. they need to be a little firm, because they have to be stuffed later on. 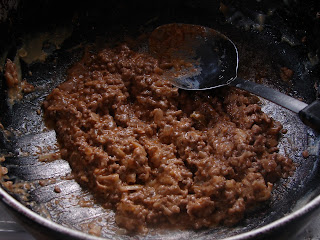 while that’s boiling, you can start making your filling. what pops did here was saute some onions and garlic in some olive oil, then added a lean mince beef to it. then he added a little more salt, black pepper, cayenne pepper, basil, thyme, a little rubbed sage, a little paprika and a small dash of bitters. then he added the remains of the sauce that he used in the cauliflower trick. (see previous post). let it cook down until the mixture gets some body.

now at some point during this filling making process, you should have taken the pasta off the stove, poured it into a strainer and set it down to cool. you will be holding it, so the cooler the better for you. 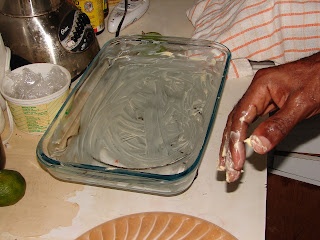 get your baking dish and grease it down with some butter. 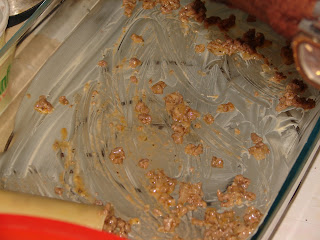 now here’s some dramatics. take a little of your filling mixture and drizzle it around the baking dish. just gives it a meatty feel when it’s done. little chunks of meat to pick up and enjoy. 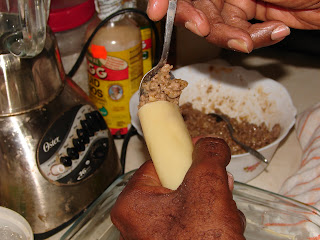 time to fill it. cover one end of the pasta with your hand while spooning your mixture in to the open end. be gentle, because it’s pasta… it tears easily. if yuh know yuh wild, boil a little more than you actually want to cater for the ones you totally shred up. 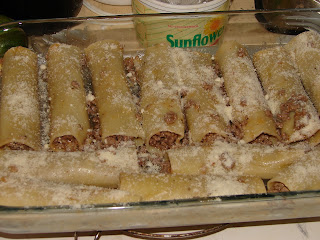 lay your creations out side by side in the baking dish. fit them however you can, that’s cool. in this instance, we sprinkled some parmesan cheese on top of them. a grated cheddar seasoned with some finely chopped celery and parsley could work well too. some pepper jack slices may be interesting. but you know our motto: “do what yuh like!” 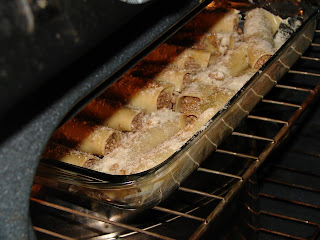 oven time. these should be fine sitting in an oven pre-heated at 350° for a while. in cases like these, i cook by colour. of course when the place becomes fragrant, you check the oven. the more fragrant, the more you check. 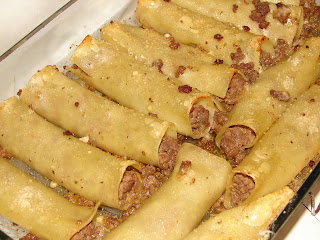 drag them out the oven, and you’re done. 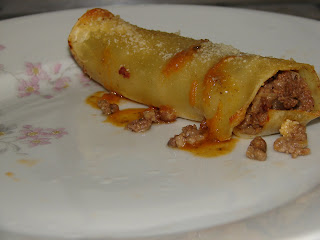 we had it like a side on a big plate, but really, i see no reason why two or three of these with a fresh salad shouldn’t be considered a proper meal. but maybe daz just me though.