i thought it would be cool to save the first real entry for my pops, as he’s the one that i started lookin at in the kitchen. still do actually. always comin up with some trick or tryin out somethin he see on tv… he not easy. anyway, he’s the one that makes the christmas meal at home, and the star of the show is always this veggie lasagna that he creates. the thing about it is he doesn’t use anything to measure the amounts besides his eyes, but it tastes exactly the same every time.
(to see what you need, scan through to the ingredients in bold) 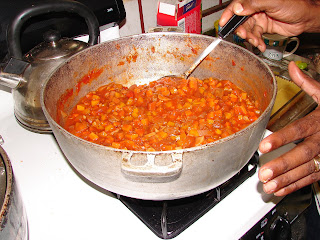 so to start it, yuh put a lil olive oil in a pot. iron pot recommended because… well… because. cut up some onion and some garlic. cut the onions chunky, but the garlic you could mince fine. not everybody could handle biting down on a big piece of garlic. put it all in the oil. yuh let that take some heat to get out the flavours, then yuh add a nice helping of diced mushrooms, eggplant, carrots and pumpkin. mix it up in the pot a little and let it cook a bit. now yuh doh want to cook it too long eh, because it have to bake still, and yuh don’t want the filling to get too soft. anyway, add to yuh veggie mix ketchup, tomato paste and spaghetti sauce (select a flavoured sauce like a 4 cheese, or a basil. ragu makes some nice ones). because the sauce will have its own salt, yuh doh really need to put any, but is up to you. take a lil taste and see if you want extra. yuh want the mixture to have a lot of sauce. you could add a lil bit of water if yuh find it a lil too thick. this will be essential for the next step. 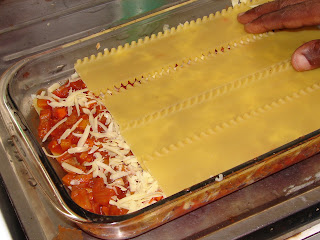 time to layer. the modern way to do this is with the ready to bake lasagna pasta. boiling takes up more time because yuh have to boil first, plus dealing with soft, hot pasta is not an easy thing. so get yuh baking dish and cover the bottom with yuh no boil pasta. feel free to break a strip to cover a smaller area and ting. all dat cool. spoon out a portion of the veggie mix and cover the pasta. make sure to get plenty sauce in it. the moisture is what makes the no boil pasta cook in the oven. yuh topping the layer of veggies with some grated cheese. (in our house, anchor vegetarian cheddar win de race. sharp and nice). repeat. yuh want to make about 3 layers of this. on the top layer though, after putting the grated cheese, sprinkle a lil parmesan cheese in de mix.

guess what? oven time. yuh want to have yuh oven hot already… pre-heated as the professionals say. set it on about 350… 400 so. cook dat until the cheese melt down and ting, it get a nice colour and yuh kitchen smellin like niceness. 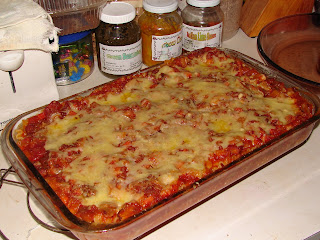 and daz it there. yuh ready to lasagna dong de place.
our christmas meal is usually the veggie lasagna, pigeon peas in coconut milk, turkey, pastelle, vegetable rice, stuffing and a salad of some sort. i usually duck the salad because i find it distracting. 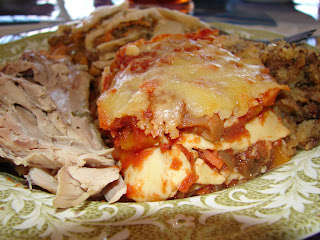 and daz it… leh we bubble.