EatAhFood - can a crab be soused? NOW WITH EXTRA PEPPER

can a crab be soused? NOW WITH EXTRA PEPPER 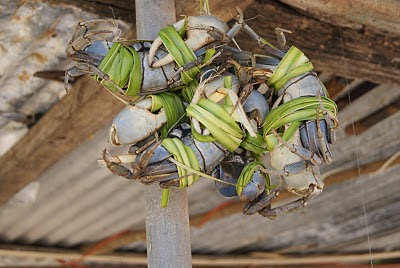 remember these? got them on an a spur of the moment lobster hunt that took us to mayaro. well, i was trying to find something to do with them. didn’t want to do something regular like curry. crab and callaloo sounded kinda tempting, but that would require making other elements to create a meal… well for me at least. crab sushi came up, but who goin to crack open all dat crab and take out the meat to make sushi? that’s what the tin is there for. then i heard something that made me pause a bit… crab souse. WHAT?! can a crab be soused? it doesn’t look like a sousy kinda critter. but then, i thought… that really might work though. lime… seafood… seasoning… nothing strange about that. why not? 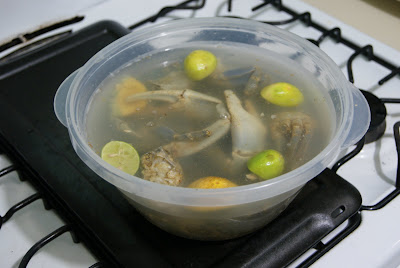 one problem though. i never made souse with anything before. actually, the first time i ate souse wasn’t too long ago when my friend jo told me to sample his souse. after that experience, i understand how crack addicts can chase a high. whenever his souse is available, i will partake. i am also on a constant look out for a souse comparable. nothing has presented itself as yet. anyway, i asked jo what he thought about a crab souse and he agreed it was an interesting idea. then came his recommendations. 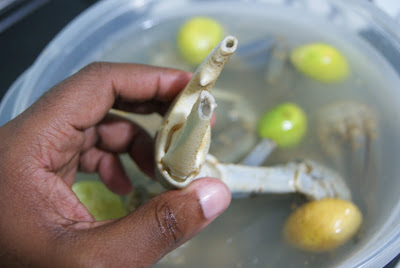 so he said the key to souse is lime. considering we’re dealing with seafood, that might be twice as true. so after washing and scrubbing these pieces as if my life depended on it, i soaked the crab in water, salt and about 5 limes. oh yeah… about them shells. well when they kill and clean the crab for you, they should cut off the tops of the gundy and the top of the legs for reasons such as these. sauce and seasonings can soak in through the little holes and your crab meat can get flavour. 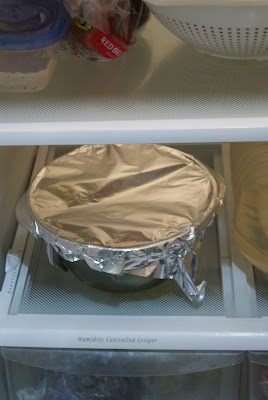 i left it covered in the fridge overnight. 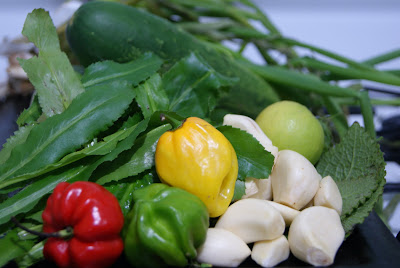 the next day, i passed through the garden up morvant to get some of that fresh stuff. shadon beni, chive, celery, parsley, big leaf thyme, hot peppers and garlic. i went heavy on the chive as directed by jo, followed closely by shadon beni. also grabbed 2 cucumbers. what’s a souse without cucumber right? i also grabbed some more limes. well, he did say its all about the limes. 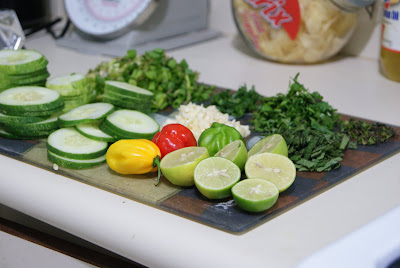 chop up, dice up, slice up… yuh know the drill. at this point i remembered the onions. looked in the fridge. not an onion in sight. oh well! hope the chive steps up. 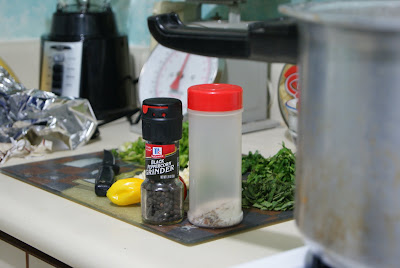 with all that going on, i didn’t think i needed much more spices. so i just took out some salt and some black peppercorns to grind in. 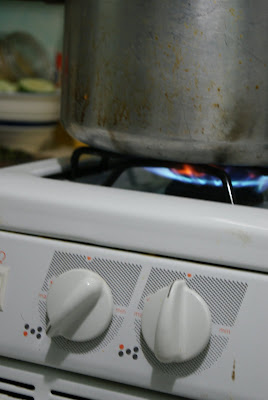 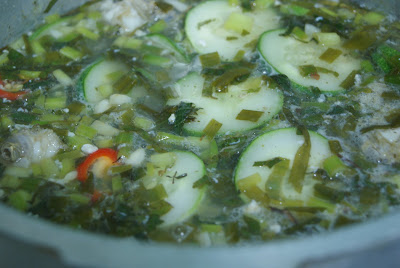 i put in a few cucumber slices to cook with the sauce so they could lend their flavour and probably get a little pickled in the process. the other cucumbers went in after the cooking so they could stay crunchy. by this time, the kitchen was smelling good. it’s crab, so it doesn’t really take long to cook. i let it bubble for about 15 minutes or so. but hey! this is bring it to the table… who’s countin anyway?! 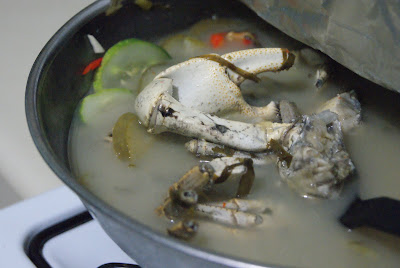 so after taking it off the fire, letting it cool and putting it back in the fridge to bring it up to souse temperature, this came out. the consistency of the sauce wasn’t like that of a pig foot or cow heel. and rightfully so. crab is not as fatty, so it wouldn’t do the same thing. but it did smell like the real deal. but being a novice souse eater and even less experienced souse maker, i called in the jury to decide. 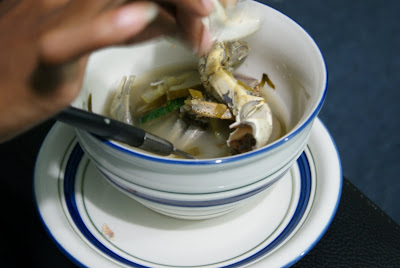 juror number 1 was chinyere. she said it was good, but it was no souse. more like a crab soup with a souse flavour. so much so, she was wondering what it would taste like hot. from the hissing i knew it had good pepper. not for chinyere who doesn’t really eat pepper, but the fact that she was hissing but not stopping said something. so i got a pass mark there. maybe not for a souse though. for something that tasted good.

juror number 2 was kesi. more of a pepper man, so he was comfortable with the heat. after establishing that this was nowhere close to jo even on his worst day, he said it was way better than he expected. still not a convincing souse, but a nice tasting thing. he even suggested that i treat it like a broth (similar to what chinyere was suggesting), buy some crab meat, make some crab cakes and serve something like that. a damn good idea if you ask me.

not keeping it refrigerated for more than a night, so i have 3 more jurors to pass judgment. a souse expert, a crab lover and a souse lover. so until then, the jury is still out on this one. but for this creation… 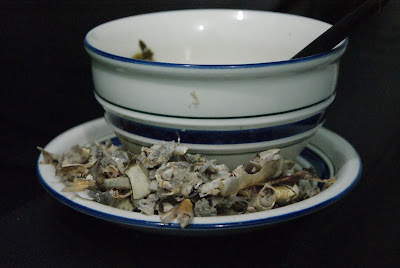 the crab lover’s comments (iz a facebook link so…)
“Was a lil iffy when I heard crab and souse in the same sentence but I love crab, so I had to try it. Well, when I smell it all hesitancy went out the door and meh mouth start to water. Ah delve in wholeheartedly. It was bess! You can te…ll from the smell and the taste that it was souse, different texture and consistency, but souse nonetheless. I find it coulda do with a lil more pepper… for me, souse have to burn, i need to hissing like a snake. While the sauce was a tad spicy, the crab – not so much. The cucumber had all the pepper. Would eat it again blind-folded (which is hard to do with crab)…“

the souse lover also endorsed it and said it tasted like what a crab souse would taste like. BUT, i think the next one would be a boss souse. think i have it worked out now. hahaha!!!